With which Territorial Force unit did my ancestor serve? 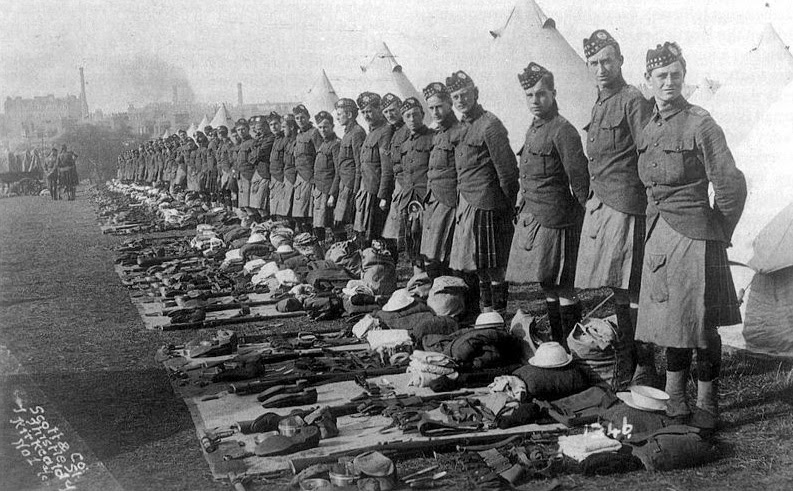 Responding to a post on the Great War Forum (GWF) tonight, reminds me that what follows might be useful advice to readers of this blog.  The questioner on the GWF was trying to find out information about a man on the war memorial at Buxton who could have served with the Sherwood Foresters and had the number 4666.  Ruling out an enlistment in the regular battalions (because this would have made the man too old in 1914) the follow-on question is, well which battalion of the Notts & Derbys did he serve with?  My response was as follows:

"Let's assume that as he's on the Buxton war memorial he served with the local TF battalion.  C Company of the 6th Sherwood Foresters was based at Buxton and for this battalion, 4666 would indicate an enlistment date of late Nov 1915 or early Dec 1915.  My army service numbers blog does not give details of the TF battalions of the Sherwood Foresters but my database suggests that this would be a likely enlistment date for a man with this number belonging to the 6th Battalion.  Other TF options for 4666 would be October 1915 for the 5th Battalion , April 1915 for the 7th Battalion and late Dec 1915 or Jan 1916 for the 8th Battalion..."

The number information comes from research I have done over the years on this particular regiment.  However, there is much useful information on the composition of the Territorial Force, and the locations of battalions and units to be found in other publications.  Key reference works for me are;

1. His Majesty's Territorial Army by Walter Richards.  Originally published in four volumes in, I think 1909,  this was re-published by Naval & Military Press and gives great detail on not only - what was the then - the new Territorial Force, but also the Volunteer Force. Highly recommended, and Naval and Military Press have it at a reduced price currently - if you're quick.

2. The Territorial Force 1914 by Ray Westlake.  Now out of print but expensive second-hand copies can still be picked up.  My volume is well-thumbed and for anyone with an interest in the First World War, this is again essential reading as it gives the locations of all TF units in early 1914.  There is also a useful index of locations.

Both of the above give detail on infantry battalions to company level.

Also well worth the investment if you can find a copy is the Territorial Force Year Book which was published only, I believe, in 1909 and 1910.  I have the 1909 edition and it gives a wealth of information not only on the composition of the TF but also the County Associations.  It's a goldmine of facts and if anyone has a 1910 edition they wish to part with, please get in touch. 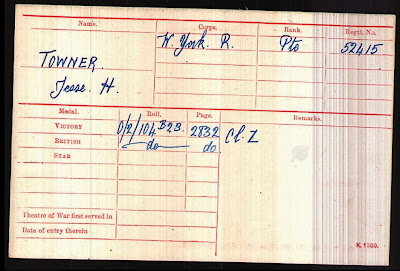 Gracious, it's been a while since I posted anything here.  There is still much to say about regimental numbers but I have been very busy on a number of other projects.

I was flicking through some old issues of Your Family History magazine the other day and in a military special issue from 2012 came across a piece by Graham Caldwell on First World War records. In it, he talks about regimental numbers and references this blog.  On the subject of numbers, and citing the example of 52415 Jesse H Towner of the West Yorkshire Regiment, he writes:

"[numbers] are... unique within the same regiment or corps... For example, a soldier in the Devonshire Regiment or Royal Field Artillery could also have the number 52415, but not another soldier in the West Yorkshire's, irrespective of which battalion he belonged to."

As a theory, this is of course, completely bonkers.  Let's have a look at The West Yorkshire Regiment in December 1914.  By this date there would have been at least three men with the number - let's pick one at random - 7000.  The first number 7000 would have belonged to a regular soldier who would have joined in 1903 and who would probably have served with the 1st and 2nd Battalions, been on the reserve when war was declared and then have been posted back to the 1st or 2nd battalions when war was declared.  7000 also appears in the series being used by the 3rd (Special Reserve) Battalion and would have been issued in 1908. The same number appears for a third time in the series being used by the 4th (Extra Reserve) Battalion and would have been issued in 1909.  So, three examples of the same number in the same regiment (and the same could be said for 7001, 7002, 7003 and so on).

As for the Territorial Force battalions, the West Yorks had four TF battalions which each began numbering at 1 in April 1908. Each continued numbering sequentially until 1917 when the TF was re-numbered and it was only then that each of the four TF battalions were issued with distinctive six-digit numbers from new series.

In actual fact, the number that Mr Caldwell refers to is unique to the regiment - but only because numbering in the other battalions didn't reach this high.  52415 belongs to that series used by the 1st and 2nd battalions and some of the later service battalions and if nothing else it tells us that Jesse H Turner was the 52415th person to be issued with a number from that series since the 1st and 2nd Battalions had started numbering from 1, way back ion 1st July 1881.

So for goodness sake don't believe the old lie that all numbers were unique to a regiment. They weren't.

Mr Caldwell also notes against the image of Jesse Towner's medal index card (above, courtesy of Ancestry) that the "Cl" in "Cl Z" in the remarks section means that he was, "sent a dated clasp".  Again, utter rubbish.  "Cl" is an abbreviation of "Class" and denotes that he was transferred to Class Z of the Army Reserve.