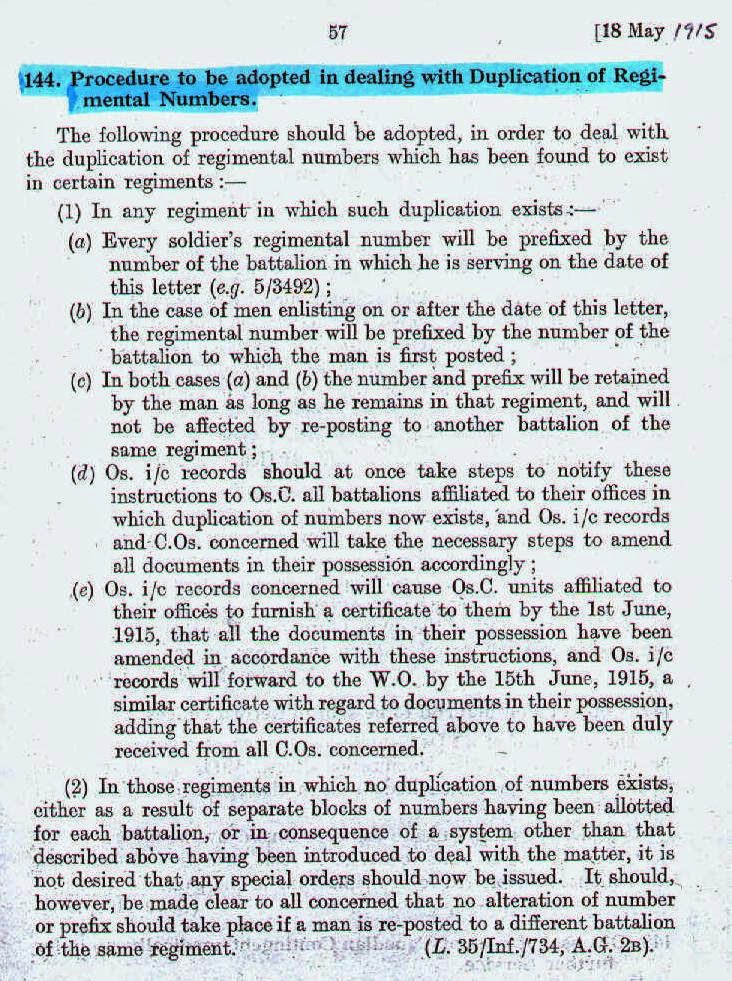 The catchy little title of this blog post was the British Army's attempt to make some sense of duplicate numbering within regiments, hence the issue of this Army Council Instruction in May 1915. In my experience, the letter of the law was not rigorously applied but at least we can see that an effort was being made.
My thanks to Graham Stewart for sending through this ACI.
I also offer a comprehensive, fast and cost-effective military history research service. Follow the link for more information. 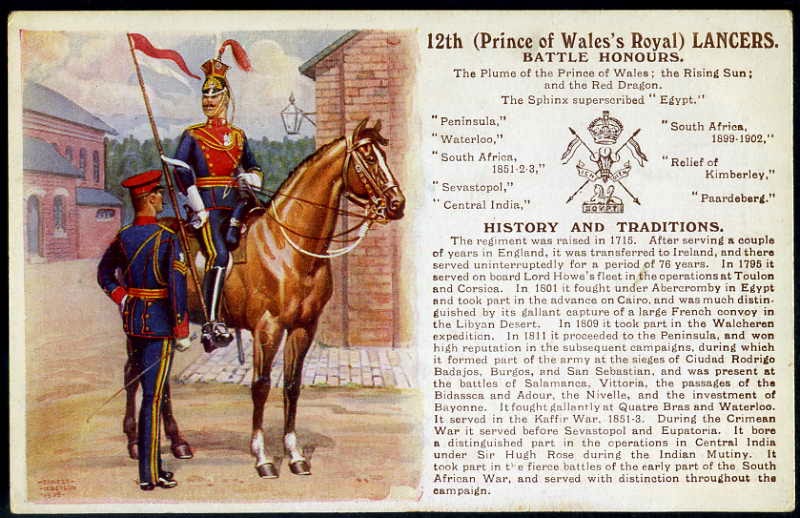 The following men were all serving with the 12th Lancers when they were captured in 1914. Read more about this data source on my 1914 PoWs page. This data has been transcribed from the Imperial War Museum's collection, specifically item B.O.2 1/238.  My full transcription of these men (not reproduced here) also contains the man's home address.

The full transcription is available for sale as part of a Lancers' PoW collection - download or CD - for £10. Contact me if you would like to purchase a copy.

Links to this post
Email ThisBlogThis!Share to TwitterShare to FacebookShare to Pinterest
Labels: 12th Lancers, Army Service Numbers, Prisoners of War
No comments: 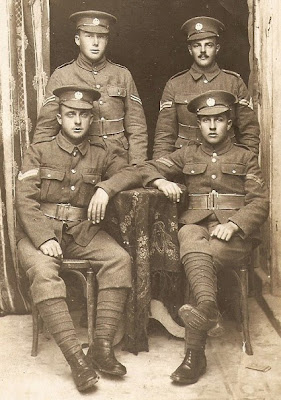 A visitor to one of my posts yesterday expressed surprise that someone listed on that post had the same number as his ancestor. How could that be?

I have covered this very common topic elsewhere but here's a quick overview of how this happens; and for the purpose of this post I'm going to refer to infantry only.

1. In July 1881 all line infantry regiments, with the exception of the Rifle Brigade, commenced a new numbering series which began at 1 on 1st July 1881. So straight away you have the first 68 duplicate numbers.
2. The militia battalions for each regiment each had their own number series too. Most regiments had two militia battalion and each of these battalions would have had its own number series. These militia battalions often recruited at a similar rate and it is quite often the case that I see numbers in the two battalions keeping pace with each other, neck and neck, over the years.
3. When the Territorial Force was formed in April 1908 the majority of its battalions started a new number series beginning at 1 although there were many notable exceptions, some of which I have drawn attention to on this blog.
4. When Britain went to war with Germany in August 1914 and new service battalions started forming, many of these battalions also started numbering from 1.

So by 1914 it would be possible, in a typical line regiment to see the same regimental number appearing in the regular battalions, the Special Reserve, the Extra Reserve and each Territorial Force battalion. Some numbers were prefixed with letters or numbers which can make identification of a particular battalion easier for today's researchers, but the application of these prefixes in documents of the time was inconsistent to say the least.

This blog only covers a fraction of the number series that would have been issued between 1881 and 1918 but I have much unpublished information on ALL infantry battalions and most corps besides. Use the index tab to navigate around corps, regiments and battalions but if you get stuck, or need additional help, have a look at the RESEARCH tab.
Posted by Paul Nixon 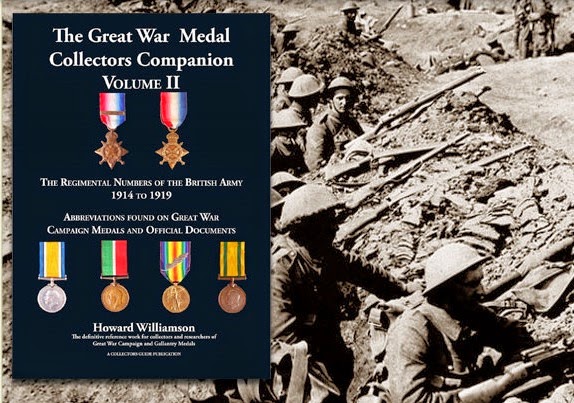 I have mentioned this Howard Williamson's Great War Medal Collectors' Companion - Vol II on my Army Ancestry blog and I see today that Naval & Military Press are promoting this quite heavily. Howard has undertaken some mammoth research here and I collaborated with him on elements of this second volume. It's gratifying to see that both I and this blog, have been name-checked in the N&MP release (above). Click on the image above or the link to order this volume. I gather from the author that it is selling fast, so don't miss out.

This from Naval and Military Press:

The contents of Volume II are as follows: FIRST CHAPTER [Chapter 6] A STUDY OF THE REGIMENTAL NUMBERS OF THE BRITISH ARMY AND DOMINION FORCES DURING THE GREAT WAR [Awarded OMRS Silver Medal 2013] This incredible study comprises 200 pages packed with information on the regimental numbers and prefixes allocated to the Soldiers of the Great War.

For the section on Line Regiments, the Author collaborated closely with Paul Nixon, whose internet blog on Regimental Numbers provided much additional information to that compiled by the Author. The Territorial re-numberings of 1917 are all included, plus information on which number blocks were allocated to those in action on the First Day of The Somme. 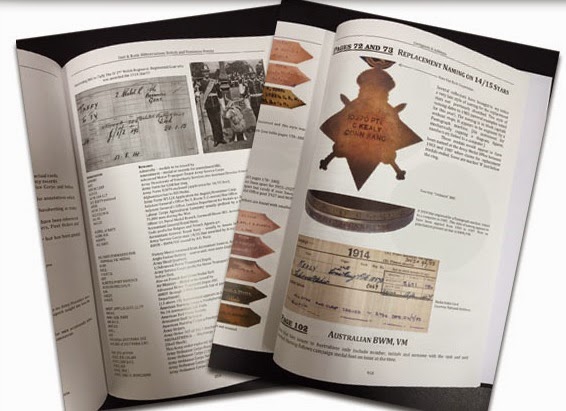 The Sections on the Corps include:

ASC: All the prefixes shown with their number range are explained and the units employing them are identified. Labour Corps. The numbers for the Labour Companies and the Regiments to which they are affiliated plus a table linking regimental numbers and transfer details and dates.

RAMC: All Territorial re-numberings including refinements to include field ambulances plus notes on number blocks prior to TF renumbering.

RAVC: Notes on prefixes and numbers.

RE: Notes on all number bands including a refined version of the TF numberings, Tunnelling, Gas and other companies identified as associated with certain number blocks. 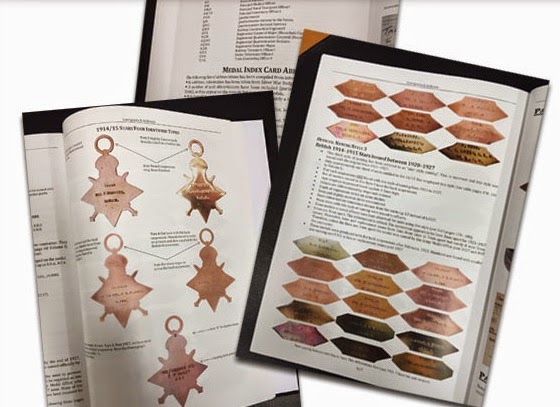 Sections on AIF, CEF SA, NZEF. Regimental Numbers. An A to Z of Regimental Letter & Number Prefixes, covering all units including Navy and RND.

SECOND CHAPTER [Chapter 7] ABBREVIATIONS FOUND ON GREAT WAR CAMPAIGN MEDALS AND DOCUMENTS This 140 page Chapter is the result of 25 years work by the Author. Sources for the information include: Medals from private collections; Medals observed at the major London (and other) auctions; Medal Index Cards; Official Documents; eBay medal sales; plus information supplied by friends, medal dealers, and collectors. The study records not only the abbreviation as it appears on the medal and its interpretation, but also many useful annotations giving further information about the rank or unit.

THIRD CHAPTER [Chapter 8] CORRIGENDA AND ADDENDA FROM VOLUME I
This section includes additional information on the following: The Wauchope Medal; Flat Back Suspensions on WW1 Stars; The Memorial Plaque additional notes; Manufacture of WWI Medals – a summary; Complete lists of proposed Battle Clasps for both the Army & Navy; Comrades of the Great War magazine; Jutland Medal, Lady Beatty; Annotated DCM Gazettes; Additions to 1.7.16 DCM Roll; Naming issues on Great War medals; also included are some revisions to tables in Vol I plus odd typographical errors corrected. 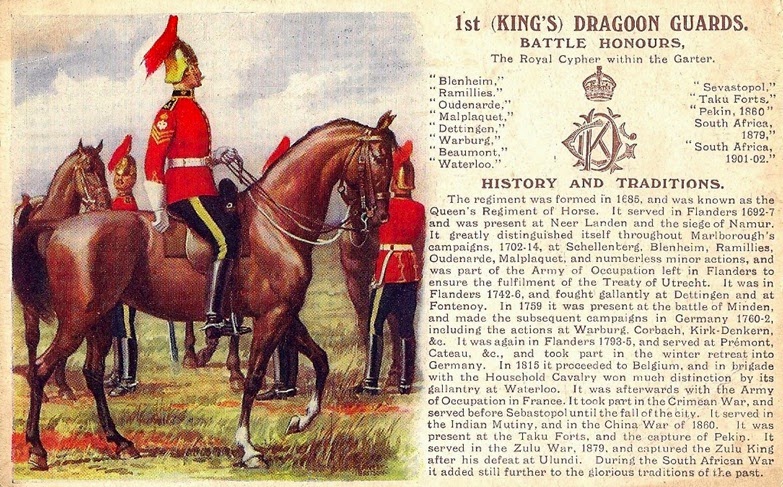 The following six men were all serving with the 1st Dragoon Guards when they were captured in 1914. Read more about this data source on my 1914 PoWs page. This data has been transcribed from the Imperial War Museum's collection, specifically item B.O.2 1/45,  B.O.2 1/57 and B.O.2 1/59. My full transcription of these men (not reproduced here) also contains the following information against some or all of the names:

The full transcription is available for sale as part of a Dragoons and Dragoon Guards PoW roll - download or CD - for £20. Contact me if you would like to purchase a copy.