The Muster Roll of Angus 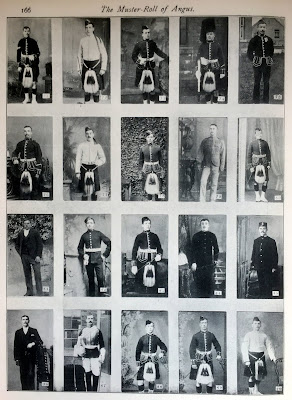 I recently bought The Muster Roll of Angus with the express purpose of uploading soldier portraits to my British Army Ancestors website. At the back of the book there are a number of pages similar to the one above which refer to an index of soldiers published elsewhere. So, for instance, the man in the third row down, second from left, is number 82 and his entry reads:

It's useful information and the date is particularly helpful as this is the date that the man enlisted. For men with unusual names, it's a fairly straightforward task, armed with their regimental details, to find them in medal rolls and on British Army Ancestors. However, for men with common names, knowing the year they enlisted is helpful because it enables me to eliminate some soldiers when it comes to searching for the correct Robert Campbell or John MaDonald. Thanks to the earlier research I have done on regimental numbers it is very easy to quickly see whether I have the right man.

For instance, the man below is indexed as: 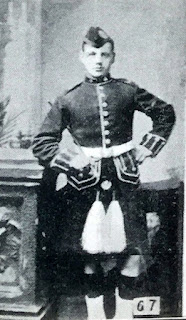 This man must be 3897 James Boath, the number 3897 dating to about the end of February 1897. I've added James's photo to British Army Ancestors and I'll be using the same logic to add other photos as well. I would imagine that the photo above dates to 1897, certainly before he'd been appointed lance-corporal and before he'd been awarded his campaign medals for the Sudan. For service during the Boer War (which is what the Muster Roll of Angus commemorates), he would go on to earn the Queen's South Africa Medal with clasps for Johannesburg, Diamond Hill, Wittebergen, Cape Colony, South Africa 1901 and South Africa 1902. He would also serve with the 12th Mounted Infantry. 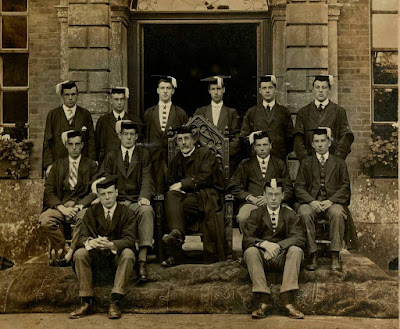 A couple of comments on this blog the other day made me think that I should perhaps just re-state its intent.

In other words, the information you'll find on this blog provides broad guidance on when and how regimental numbers were issued in the British Army between 1881 and 1918. In fact it wasn't until 1920 that army numbers replaced regimental numbers and so in actual fact I should have titled this blog, "Regimental Numbers 1881-1918".

All numbers published here come from a far larger database which I have compiled over many years and which I still use daily as a rough ready-reckoner.

As far as I am aware, complete runs of regimental numbers and dates of issue do not survive for the majority of regiments. However, there are some notable exceptions:

1. The Guards regiments have pretty complete runs of men who joined up during this period as they still have in their possession both enlistment registers and papers. Of the five regiments, the Scots Guards have published many of their records on Findmypast, and more will follow next year. The other four Guards regiments are either still hanging on to their records - just - or have transferred them to the MoD.
2. The Honourable Artillery Company, the oldest regiment in the British Army, have a complete run of men as a result of their membership lists, nominal rolls, and service cards which are all published on Findmypast.

I know of no other complete regimental rolls although there are of course various battalion nominal rolls which survive or which have been compiled in later years.

I've borrowed the photo on this post from the Radley College archive. Many of these boys, prefects when this was taken in 1913, would go on to serve their King and Country between 1914-1918. 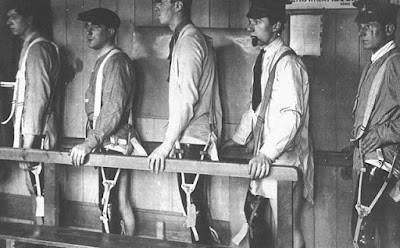 The first image that appears in Thomas Davies's file in series WO 364 is that of a Field Medical Card dated 24th February 1917. It notes, "42151 Pte Davies, T, 11th South Wales Borderers; amputation of left leg below knee, multiple small wounds, right ankle & toe. GSW rifle grenade." The card is stamped by the 131st Field Ambulance, the reverse detailing the amount of morphia doses given to Thomas, and the times these were administered.

Thomas was awarded a 100% disability pension for life. In 1918 this amounted to 21 shillings a week and by 1932 this had risen to 40 shillings a week. A claim that year for an additional payment for a carer was rejected; a note in his file reports, "Is able to do everything for himself but doesn't like going out without an escort."

Thomas Davies was the younger brother of Aaron Davies, and when the 1911 Census was taken he was living with Aarion and his wife Beatrice and their two young children at Pentilcoch, Tregoyd, Three Cocks, Breconshire. Three years later, with Britain at war, he enlisted with the 2/1st Herefordshire Regiment on the 14th October 1914 aged 17 years and four months. He proceeded overseas on the 27th July 1916 and after treading water at an infantry base depot at Rouen for a month, was posted to the 2/4th Battalion, South Wales Borderers on the 24th August 1916, and subsequently posted to the 11th Battalion. It was whilst serving with this battalion that he sustained what we would term today, life-changing injuries.

I would be interested to know what happened to Thomas Davies after he left the army. He had been employed by the Honourable Robert Charles Devereux (17th Viscount Hereford) of Tregoyd and a note in his file after he had received his injuries states that Viscount Devereux had indicated that he would continue to employ him. In what capacity is unknown, however, and the detail about his pre-war employment is not recorded on his attestation papers. Viscount Hereford's son, Robert Godfrey de Bohun Devereux, had also been wounded whilst serving with the Welsh Guards.


Contact me if you need help.
Posted by Paul Nixon 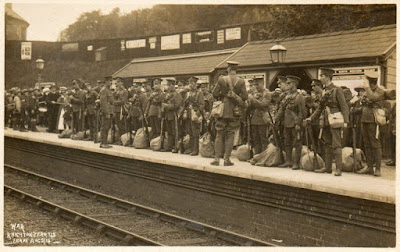 Undertaking some research for someone the other day into a man who served with the Herefordshire Regiment, reminds me that I have not, to date, posted anything on this regiment. Here then is some detail on regimental numbering in this regiment.

Knowing the recruitment areas for men who joined prior to 4th August 1914 is important. For instance, if a man was living in Ruardean and joined the regiment pre-August 1914, the likelihood is that he would have served with E Company. By the time that Britain went to war in August 1914 however, such distinctions were lost as men flocked to the colours and were allocated to those companies which could accommodate them.

In other words, more men joined the regiment between August and December 1914 than in the period April 1908 to July 1914.

From September 1914 the majority of men joining the Herefordshire Regiment would join the 2/1st Battalion and many of these men would find themselves sent to France in August 1916 before transferring to the South Wales Borderers to help fill the gaps caused by casualties on the Somme. During the course of my research I came across the record of a Herefordshire Regiment man 42151 Pte Thomas Davies - who was badly wounded in early 1917 and I will tell his story in a separate post. It deserves to be told and he deserves to be remembered.

The photo that I have used on this page shows men of the 1st Herefordshire Regiment waiting on a station platform en route to Hereford in 1914. It comes from the Courtyard Centre for the Arts website.