In this post I will be looking at regimental numbering in the 6th (Territorial Force) Battalion, Norfolk Regiment between April 1908 and October 1914.
On the 1st April 1908, the nucleus of the 6th (Cyclist) Battalion, Norfolk Regiment was formed from what had previously been cyclist companies of the four Volunteer Battalions, Norfolk Regiment. A, B, C and D Companies were formed from the VF companies, with E, F, G and H Companies raised subsequently.  The newly formed 6th (TF) Battalion was headquartered at Cattle Market Street, Norwich and distributed as follows:
A Company: Norwich
B Company: Great Yarmouth
C Company: King's Lynn, with a drill stations at Terrington
D Company: Thetford, with a drill stations at Attleborough
E Company: Fakenham, with drill stations at Walsingham, Holkham, Wells and Ryburgh
F Company: Ditchingham
G Company: Watton, with a drill station at Swaffham
H Company: Norwich, with a drill station at Great Yarmouth
The battalion was attached to Eastern Command.
Here are some sample regimental numbers and joining dates for the the 6th (Cyclist) Battalion, Norfolk Regiment:
7 joined on the 5th April 1908
371 joined on the 1st January 1909
601 joined on the 14th March 1910
710 joined on the 20th March 1911
826 joined on the 11th March 1913
954 joined on the 10th March 1914
1156 joined on the 7th August 1914
1272 joined on the 1st October 1914
A reserve or ‘second-line’ battalion was formed at Bridlington in October 1914, the original 6th Battalion now becoming the 1/6th Battalion and the new reserve battalion becoming the 2/6th Battalion. A 3/6th Battalion was formed at Norwich in May 1916 and disbanded in March 1916 without ever serving overseas.  All three battalions - the 1/6th, 2/6th, 3/6th - issued numbers from the same regimental number series and from 1917 reissued numbers to serving soldiers and to new recruits from a brand new regimental numbers series which began at 265001 and extended to 290000.
Use the regimental numbers above to estimate when a man would have joined this battalion between 1908 and August 1914. For example, if your man had the number 555 and lived in Holkham he would have joined the battalion between January 1909 and March 1911 - and probably served with E Company.
Remember. I research soldiers! Drop me a line if you need help
To search for photos of your Norfolk Regiment ancestors, check my British Army Ancestors website.
Posted by Paul Nixon 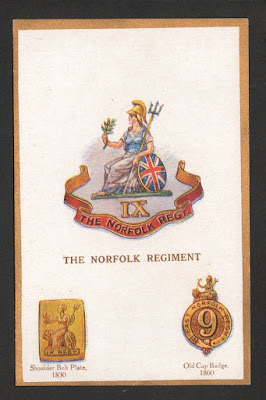 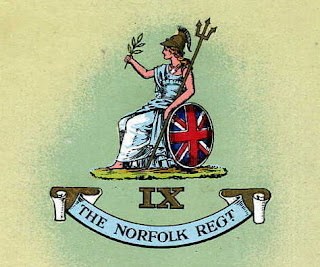