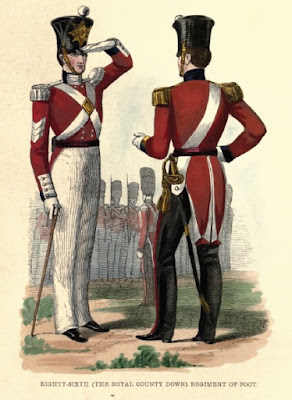 My thanks to pal Martin Gillott who posted much of the information below on my post concerning numbering in the regular battalions of the Royal Irish Rifles. Rather than hide his hard work there, I thought this deserved a post of its own. Thank you, Martin.

Martin notes that 7028 attesting one day before 6983 and 7262 attesting one day before 7207 (both in italics above) suggests that batches of numbers were used at different recruiting stations. This may be the case but I don't think the army was that well organised. Note too that when a man attested, the attestation date was recorded at the bottom of the form but the regimental number would not have been added to the papers until the man presented himself at the depot. I think therefore that the out of sequence patterns - commonly seen on attestation papers - is probably explained by the time delay between attesting and then presenting at the depot where the number would have been issued.

The Special Reserve and Extra Reserve battalions all became simply 'Reserve' Battalions in late September 1915 and the specific numbering sequences for these battalions ceased.

As Martin noted on his comment, the Royal Irish Rifles is one of those regiments where there is room for numbering confusion:

There is only a handful of Royal Sussex Regiment other ranks listed in the Imperial War Museum archive of men who were captured before Princess Mary could send them her 1914 gift tin.  The men listed below appear in the following two archive sources:
Additional information not reproduced below includes some or all of the following:

I've borrowed the photograph on this post from the excellent, Sussex PhotoHistory site. It shows NCOs of the Royal Sussex Regiment probably photographed between 1899 and 1902.

I have some Royal Sussex Regiment medals for sale.