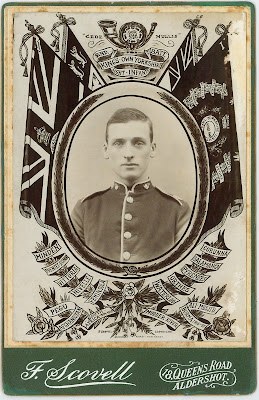 This post will look at regimental numbering in the 3rd (Special Reserve) Battalion of the King's Own Yorkshire Light Infantry (KOYLI). Thanks to AHJ for planting the suggestion.

Thus, for example, Daniel Firth was given the number 9546 when he originally joined the 3rd (Militia) Battalion on the 25th June 1906. He opted to transfer to the 3rd (Special Reserve) Battalion in June 1908 and retained his old number, 9546.  Men joining the 3rd (Special Reserve) Battalion for the first time were given new numbers beginning at 1 which were prefixed with the number 3/. This prefix was inconsistently used, as it was in other regiments, for that matter.

Recruitment into this battalion increased dramatically by August 1914 and so we see 3/1567 issued on the 15th August and 3/2149 issued on the 2nd September. By the end of the month, over a thousand men had joined the battalion with the number 3/3204 issued on the 26th September 1914.

The regimental number series continued to be used well into 1915. For instance, 3/3683 was issued on the 26th October 1915 and 3/3691 on the 20th November 1915. This is the highest number I have come across in this series although do beware other numbers masquerading as 3rd (Special Reserve) Battalion numbers.

For example, 18849 Harry Bennett joined the KOYLI on the 30th August 1914. This regimental number belonged to the series which had originally been the preserve of the two regular battalions. Harry was originally posted to the regimental depot on the 30th August and then to the 3rd Battalion on the 27th October 1914. His regimental number on his attestation papers includes the number 3/ prefix and yet this number does not belong to the 3rd Battalion series which, as noted above, may not have made it beyond 3/4000.


I research soldiers! Contact me if you need help with your military ancestor. 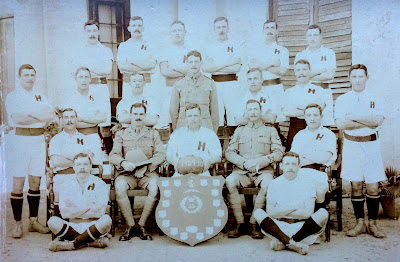 As another year draws to a close, here's what I achieved in 2017.


In addition to the blogging and the tweeting (I'm not sure how I can easily count the number of tweets I sent) and the research enquiries, I also continued with my own research projects. Having already transcribed all non-fatal casualties reported in The Times newspaper for September and October 1914, I set myself a target to complete the months November 1914 to February 1915 inclusive. A week ago I finished this stage of the project and now have a database of over 75,000 names. I will probably transcribe March 1915 in 2018 but with then call it a day on this particular project - perhaps.

I acquired several hundred books, - necessitating the purchase of another five bookcases - and which included some very useful runs of chronicles and annuals to the Rifle Brigade, King's Royal Rifle Corps and Sherwood Foresters. I still have some gaps though and I shall be looking to fill these in 2018.

I see more of the same on the blogging and research fronts, with the focus on British Army Ancestors. I will also be continuing my transcription work on the British Army in 1911 (UK and Irish census returns) and looking at other sources of information on the BEF of 1914. I also have two other smaller indexing projects which I hope to complete.

In October 2018 I will lay a wreath at The Menin Gate Memorial for my great uncle, John Frederick Nixon whose 100th death anniversary occurs on the 3rd October.

For now though, I wish all my readers a very Happy Christmas and I look forward to continuing the work in 2018.

The photograph on this post shows men of H Company, 1st Duke of Wellington's (West Riding) rugby team in India in 1910, one of many photographs of the British Army acquired this year.
Posted by Paul Nixon

Here's another football team from the 10th Battalion, Middlesex Regiment; this time with a date. .

The names on the reverse of the card read:

I searched for these men using my British Army Ancestors search engine and come up with the following results:

The 10th Battalion was in Lucknow between June and October 1917. A partial service record exists for Charles Mitchell which gives his stations as follows:

In the cases of the men above, I used their six-digit Middlesex Regiment numbers to identify them. Numbers in the range 290001 to 315000 were issued to men in this battalion in early 1917 and so they are easy to find in a search of service records and medal index cards (and all of these men would have been entitled to receive medals). For instant results, go to British Army Ancestors  and simply type 290* middlesex* in the search box. Over a thousand results are returned, the vast majority of these being men from the 10th Middlesex Regiment. 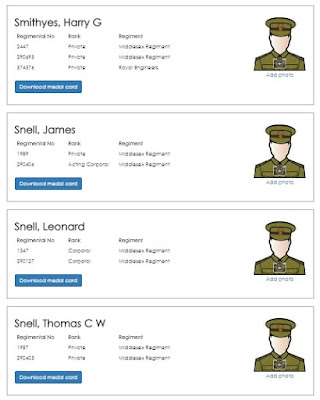 I picked this photo up on eBay in the week. It's undated but the reverse gives some great detail which has enabled me to identify most of the men. Here's the reverse:

So clearly these are men from a detachment of the 1/10th Middlesex Regiment in Chakrata. My guess is that this photos dates to 1917 onwards and the 10th Middlesex Regiment - a Territorial Force battalion - was re-numbered in 1917 with numbers in the range 290001 to 315000. It stands to reason then that these men would have regimental numbers beginning with 290. And so it turned out. Here's my transcription and follow-up research:

So apart from Tindall and Scales I have identified all of the men on this card and, what's more, I've added faces to the names on my British Army Ancestors website. I also used the site to search for them in the first place, typing in their names, a partial regimental number and the regiment name, like this:

This search criteria then returned the result I was looking for, and enabled me to upload the photo:

To me the photo is also interesting in that it demonstrates the powerful part that fate could play in an infantryman's life. Whilst this group was posing with their football in north India, thousands of others were dying on the battlefields of the Western Front.