Hertfordshire was not a large enough county to sustain regular battalions but it did have a single Territorial Force battalion which was formed on 1st April 1908 as the Hertfordshire Battalion, Bedfordshire Regiment and which became the 1st Battalion, Hertfordshire regiment the following year. The distribution of companies and drill stations was as follows:

When the Territorial Force was re-numbered in 1917, men from the 1st Hertfordshire Regiment were issued numbers in the range 265001 to 290000, the lowest number being issued to the man with the lowest number from the first series.

Email ThisBlogThis!Share to TwitterShare to FacebookShare to Pinterest
Labels: Herftordshire
No comments: 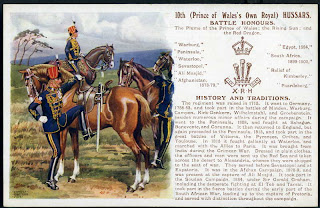 This post will look at numbering in the 10th (Prince of Wales's Own Royal) Hussars between 1881 and 1905. The cavalry regiments were unaffected by Cardwell's Army reforms; however, in keeping with the parameters of this blog, my starting point is 1881.

Email ThisBlogThis!Share to TwitterShare to FacebookShare to Pinterest
No comments:

Michael Hooper joined the Royal Dublin Fusiliers on 8th Jun 1894 and was given the regimental number 5089.  He was posted to the Depot and remained there until posted to the Home Battalion (in this case, the 1st Battalion) on the 23rd August 1894. He remained with the 1st Battalion, which was then stationed in Sheffield, until the 10th February 1896 when he was posted to the overseas battalion, the 2nd Battalion.  This battalion would have been stationed in Quetta when Michael Hooper joined it and his service record notes that he remained with the 2nd Battalion until September 1902 when he was posted back to the regimental Depot. In the intervening years, Hooper would have seen service in Bombay, Natal and South Africa, the battalion moving back to Ireland in 1902 (and becoming the Home Battalion) whilst the 1st Battalion, already overseas in South Africa as a result of the Boer War, moved on to Crete and Malta and took up the role of the overseas battalion.
Michael Hooper was transferred to the Army Reserve in October 1902 and on completing this period of reserve service elected to join Section D Reserve for a further four years.  He was finally discharged from Section D Reserve  on the 7th June 1910.
At no point during his army career, did Michael Hooper's number change.  Why would it?  He joined as a regularsoldier and moved freely between the two battalions during his army career.  Whilst on the reserve, had he been recalled to the Colours, he would have retained his service number.  However, from the moment he was discharged in 1910, his number would also have been discarded.  Even if he walked around the block and decided to re-enlist, that number would not have been re-issued to him.
The image from Michael Hooper's service record in WO 363 (above) is Crown Copyright and reproduced by courtesy of the National Archives.  Interestingly, the same papers (but beautifully preserved) exist in WO 97, so here's another version of the same document: 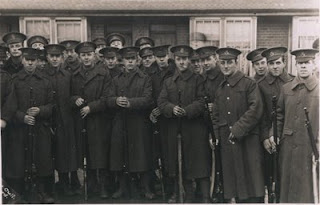 This may be preaching to the converted, but it's a new year and probably time for a reminder that one number series doesn't fit all.

On this blog I have posted pointers to enlistment dates for many British Army regiments and battalions within those regiments. All of the 69 Infantry of the Line regiments are covered to some degree - mostly number sequences from 1881 to 1914. You'll find the five Foot Guards regiments represented here; also the majority of the Cavalry of the Line; some Special Reserve and Extra Reserve battalions, Territorial Force Battalions and Pals battalions. What is shown on these various posts is simply a snapshot of enlistment dates and numbers, a snapshot which will hopefully assist researchers in narrowing down a likely enlistment date for a soldier based on his number.

Do bear in mind though that a typical county regiment would have employed several different numbering sequences for the men in its battalions. Let's look at the hypothetical Blankshire Regiment and take August 1910 as our starting point.

Also administered from the Regimental Depot are those men who have joined the Special Reserve and Extra Reserve. These battalions are a legacy of the Militia which was disbanded in 1908 and each of these battalions has its own numbering sequence.

So far then we have the following number sequences for the Blankshire Regiment:

Britain goes to war in 1914 and soon drafts for the 1st and 2nd Battalions are required. Men from the 3rd (Special Reserve) and 4th (Extra Reserve) Battalions are sent out to France to fill the gaps. They retain their Special Reserve and Extra Reserve Battalion numbers albeit there is often nothing in surviving documentation to distinguish these men’s numbers from the numbers of the regular soldiers. Some medal index cards may prefix these SR and ER men’s numbers with S/ (for Special Reserve) or 3/ or 4/ (to designate their battalion) but this is by no means a uniform practice.

Take a hypothetical example of 3456 John Smith who was KIA with the 1st Blankshire Regiment on 1st December 1914. John Smith was only 20 when he was killed and yet looking at the number sequence posted on this blog for the 1st Blankshires, it suggests that 3456 was issued between January 1894 and January 1895 – when John was 10 years old. How can that be? The answer is almost certainly that John Smith enlisted with the 3rd (Special Reserve) Battalion in 1912. His number fits the sequence being used by the 3rd Battalion and this in turn suggests that he joined the 3rd Battalion but was posted overseas to the 1st Battalion, retaining his 3rd Battalion number.

I will continue to post sequences on this blog – there are many, many more to go – but in the meantime, don’t be puzzled if, on the face of it, a man’s regimental number and the suggested joining date parameters that I have posted, don’t at first appear to make much sense. Don't rule out enlistment in the Special or Extra Reserve battalions.