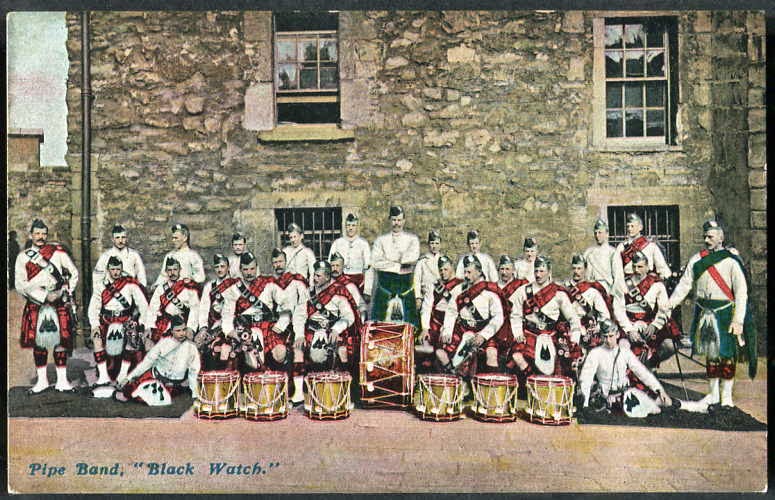 The following men were serving with the Black Watch (Royal Highlanders) when they became prisoners of war of the Germans on or before Christmas Day 1914. There are 53 names in this list; quite a modest total by the standards of 1914.  Read more about this Prisoner of War data source on my 1914 PoWs page.

This data has been transcribed from the following sources which are now housed at the Imperial War Museum:

My full transcription of this Black Watch Prisoners of War roll call of other ranks (not reproduced here) also contains the home address or next of kin address, and date of capture against many of the men's names. Note that date of capture is also included, in many cases, on these men's medal index cards.

The roll also includes the names of a handful of men who have a 1915 date of capture against their names. As they appear in the original archive, I am also including them here:

The image on this post shows the Pipe Band of the Black Watch at Edinburgh Castle c1905. 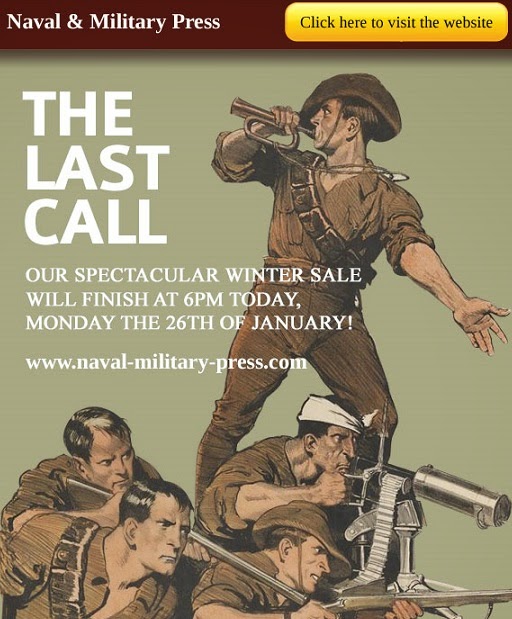 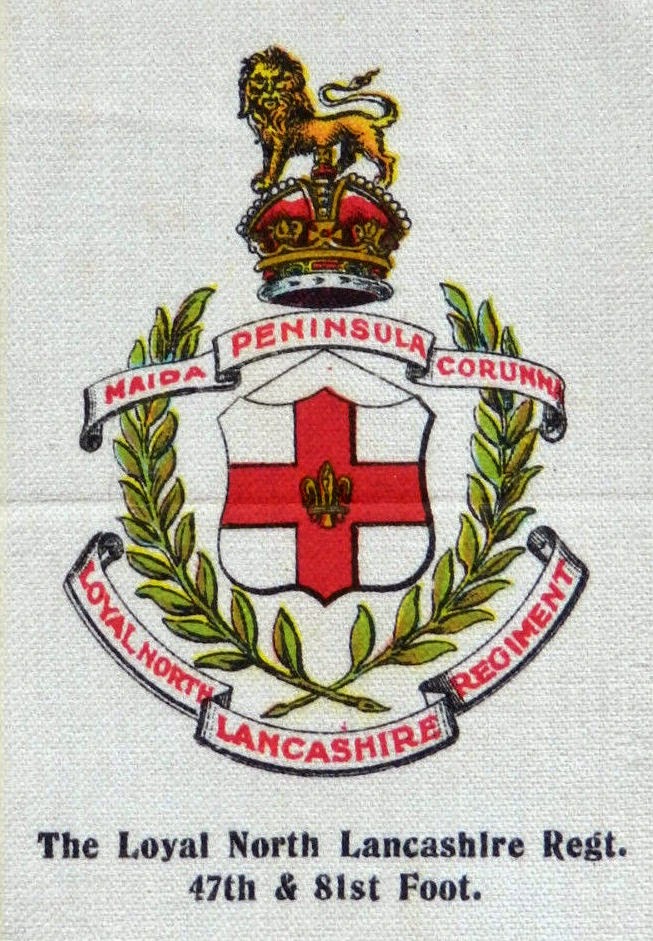 This data has been transcribed from the following undated and badly faded source at the Imperial War Museum:

My full transcription of this Loyal North Lancs Prisoners of War roll call of other ranks (not reproduced here) also contains the home address against most of the men's names. 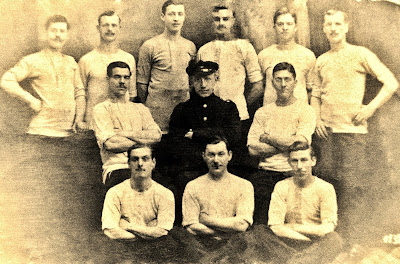 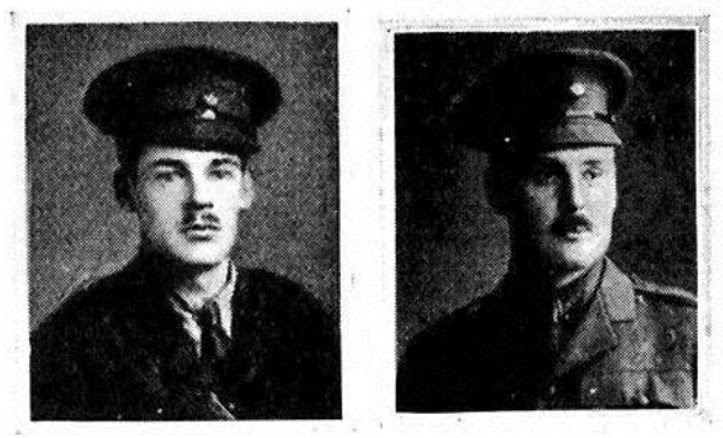 Yesterday, on my WW1 Remembrance blog, I posted brief details of King's Royal Rifle Corps deaths a hundred years ago. As with all of my posts on that blog, I choose names at random and never really know how much I'm going to find out about the individuals when I set out to commemorate them. That's one of the many joys of military research.

I thought it might be an idea though, to use this post to dig a little deeper into those KRRC men's regimental numbers. I have not checked surviving service records to see how many of the men still have papers and so what follows is a toe-in-the-water on this topic; a brief over-view.

The KRRC, like the Rifle Brigade, employed a variety of number and letter prefixes. In fact, between the two regiments, they'd covered a good deal of the alphabet by the time the armistice was signed in November 1918.

The majority of the men who died on the 10th January 1915 have no number or letter prefixes and their numbers range from 2378 (Rifleman Charles Edward Allen) to 11996 (Rifleman George Winnall). All of the men with numbers in this range were regular, career soldiers. Using the Index, I located the post for regular King's Royal Rifle Corps enlistments and could then see at a glance that Rifleman Allen joined in 1899, whilst Rifleman Winnall was a war-time enlistment who joined in 1914. (In fact I checked to see whether either man has a surviving service record. Charles Allen does not, but George Winnall's badly damaged papers show that he joined on 5th September 1914).

My page on number prefixes gives further information about the A/, R/ and Y/ prefixes used by the King's Royal Rifle Corps.

Three men have the A/ prefix.  A/3226 Tom Clark was 31 years old when he re-enlisted with his old regiment on 31st August 1914. He had seen prior service with the 4th King's Royal Rifle Corps. No papers appear to survive for A/2184 Rfm Alfred Houghton or A/2819 Rfm James Perks.

As one might expect, there are relatively few men whose numbers carry the R/ prefix (although still more than I would have expected for this early on in the war):

If nothing else, this certainly demonstrates how quickly some men were sent to the Front. Francis Gideon Taylor joined in September 1914 whilst the others in this group all joined in the first two weeks of October. As you can see, the majority were overseas by November 1914.

Six men have the Y/ prefix appearing against their numbers:

Of the above men, papers survive in WO 97 for Charles Eckhoff who, like George Barrett, had prior service with the KRRC militia and as a regular soldier. He was discharged as a time-expired KRRC regular in 1912. Further research would need to be undertaken to see if papers survive for other men with the Y/ prefix/

Finally, 5/4908 George Hayden was 37 years old when he signed up on the 11th August 1914. He indicated at the time of his attestation that he had also seen prior service, but the finer detail is not recorded on the attestation. His attestation paper is - as one might expect from the 5/ prefix to his number - that of the Special Reserve. The letter of the law of that attestation was obviously not carried through as he was overseas by November 1914.

Pictured at the head of this post are, from left to right, Second Lieutenant James Fairfax Amphlett Morton, and Lieutenant Malcom Eyton Lawrence. Both men had their portraits and potted biographies published in De Ruvigny's Roll of Honour after the war.

Forty-three men; a real mix of regulars, time-expired regulars, war-time recruits, and Special Reserve and all united forever with a common date of death: 10th January 1915. 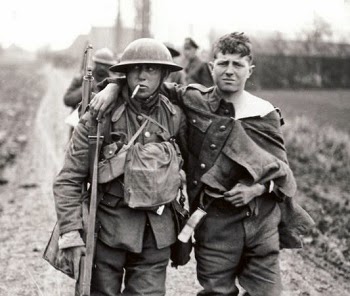 I just noticed that this blog gets a mention, and a link, on Chris Baker's, The Long, Long Trail website. This is, in my opinion, still the number one First World War resource online and I visit it daily. The site is both informative, intuitive and has good search functionality. If it's not already in your bookmarked list, I'd suggest it probably should be.  The image above is taken from The Long, Long Trail.

Email ThisBlogThis!Share to TwitterShare to FacebookShare to Pinterest
2 comments: 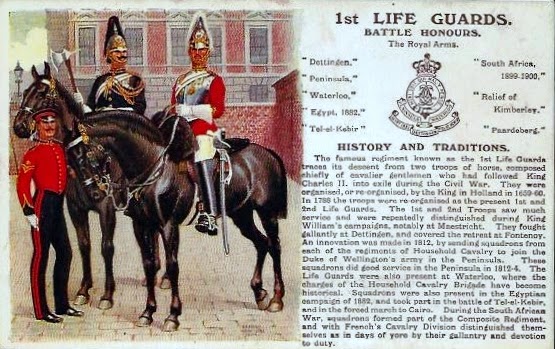 The following list of 16 1st Life Guards NCOs and men has been transcribed from the Imperial War Museum's collection, specifically the following items:
My full transcription of this collection (not reproduced here) also contains home addresses for most of the men.

The full transcription is available for £15 as part of my Household Cavalry PoW collection. Contact me if you would like to purchase a copy.