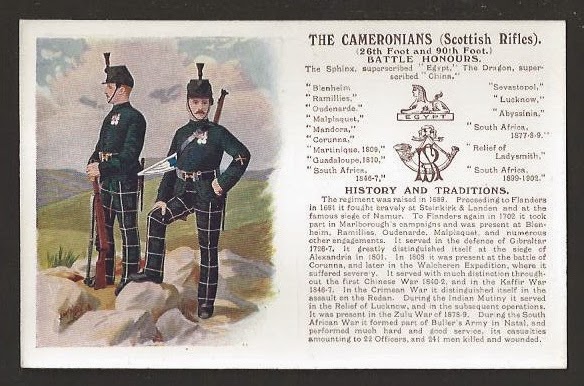 
There are over 28,000 Cameronians (Scottish Rifles) pension and service records (for this regiment - and its antecedents) in various War Office series held at the National Archives. Clicking on the link will take you to the results on Findmypast but you will need a subscription or Pay-Per-View credits to actually view the records. Some of these records can also be viewed on-line on Ancestry although Findmypast has by far the most comprehensive service record collection.

Use the regimental numbers and dates on which these were issued, below, to determine parameters for when your own Scottish Rifles ancestor would have joined up. Note though that these numbers are only for regular enlistments. Special Reserve and Territorial Force battalions operated completely separate regimental number sequences.


The Scottish Rifles fielded two volunteer service companies during the South African War and also sent a further draft of 38 men to join the 2nd VSC.
Men joining the 1st VSC were issued numbers within the range 7820 to 7981.  Some 2nd VSC men were also issued with numbers in this range, from 7939 onwards.  The bulk of the 2nd VSC men were issued numbers within the range 7984 to 8082. The thirty-eight men who joined the 3rd VSC were given numbers 8093 to 8131.  All Scottish Rifles VSC numbers were issued in early 1900.
On 17th February 1900, the 1st VSC comprising three officers – Captain J W Young, Lieutenant A A Kennedy and Lieutenant Clarke - and 113 men, embarked aboard SS Gascon for South Africa.
7294 joined on 8th May 1901
7435 joined on 2nd January 1902


The First World War
When Britain went to war in August 1914, men joining the new service battalions were issued with numbers from the same series in use by the two regular battalions.
Recruitment rates 1881-1911
Between 1st July 1881 and 10th January 1891, The Cameronians (Scottish Rifles) recruited 3,753 men, an average of 392 soldiers a year and the eleventh best recruitment rate of all the British infantry regiments that decade.  This however, was to be the regiment’s best showing and recruitment into the regiment would show marked dips over the next two decades.
Between the 10th January 1891 and the 8th May 1901, The Scottish Rifles recruited 3,541 men, an average of 343 men per annum, and in the period 8th May 1901 to the 3rd February 1911, recruitment dropped again to an average of 331 men per year. From having been the 11th most successful recruiting regiment by January 1891, twenty years later the regiment had fallen to 37th position.
Overall, between 1st July 1881 and 3rd February 1911, The Scottish Rifles recruited 10,520 men, bang on the national average of 355 men a year.
1st Battalion stations 1881-1914 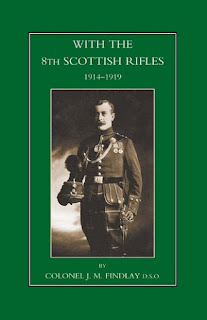 From the Naval and Military Press:

"The 8th Battalion Scottish Rifles (Cameronians), which was based in Glasgow, was part of the Scottish Rifle Brigade (later 156th), Lowland Division (later 52nd). In May 1915 it sailed, with the division, for Gallipoli where it landed on 14th June. During the fighting at Gully Ravine only two weeks after landing the battalion lost 25 officers and 448 men; only four of the officer casualties ever returned to serve with the battalion. Following the action the 7th Battalion (which had also suffered heavily) and the 8th formed a composite battalion which was eventually taken off the Peninsula on 9th January 1916 and went to Egypt, where, after a few weeks, it was reorganized into the two battalions. The division took over part of the Suez Canal Defences and in August 1916 the battalion fought in the battle of Romani in which its casualties totalled 3 officers and 31 other ranks. Subsequently the battalion fought in Palestine at the battles of Gaza and took part in operations leading to the capture of Jerusalem.

"In April1918 the 52nd Division was sent to France and in June the battalion was transferred to the re-constituted 34th Division (103rd Brigade) with which it took part in the Advance to Victory. After the armistice the 34th Division was selected for the march into Germany and with it went the 8th Scottish Rifles. The author, who commanded the battalion from June 1917, originally intended this to be an official history of the 8th Scottish Rifles, but he found the records were not complete, in addition to which friends and colleagues were suggesting that a personal touch would make the book more interesting and acceptable to the prospective readers, and that is how he wrote it. This is apparent in the observations and criticisms he makes which would have been out of place in an official version. In a series of appendices there is a very brief account of the second and third line battalions, neither of which went on active service.

"The roll of officers, by companies, who embarked with the battalion for Gallipoli is given as is the Roll of Honour, the summary of casualties (1976 in all of whom 628 were dead), and the list of Honours and Awards."