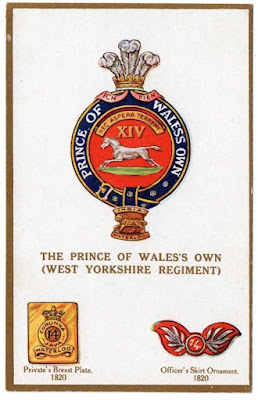 This post will look at regimental numbering in the 4th (Extra Reserve) Battalion of the West Yorkshire Regiment between 1908 and 1914. The Special Reserve and the Extra Reserve were the natural heirs to the militia battalions which, for the most part they replaced in 1908. My 2009 article on the Creation of the Special Reserve in 1908 may be helpful here.

Men joining the militia and special/extra reserve were not career soldiers. The Army Book for the British Empire, published in 1893 provided a useful summary of the militia when it noted:

"Its object is to maintain in the United Kingdom a trained body of men available "in case of imminent national danger or great emergency" to supplement the regular army in the defence of the country.

"It offers military service to the class of men willing to give it for a month in the year for training of for the term of their engagement on emergency, but whose avocations do not lead them to become either regular soldiers or volunteers."

Most 1914 Star rolls show plenty of evidence of Special Reserve and Extra Reserve men who served alongside career soldiers. Sometimes their numbers are prefixed by the number of their battalion - typically a 3/ or 4/ in most line infantry regiments - but just as often there will be no prefix.

Confusingly, for those with an interest in West Yorkshire Regiment regimental numbers, the series used by the 4th Battalion pretty much kept pace with the series used by the 3rd Battalion, but both were distinct series and that is important to remember. Also important to note is that when these men were called up as drafts for the regular 1st and 2nd Battalions from August 1914, they retained their original 3rd and 4th Battalion regimental numbers.