In 1908, the birth of the Territorial Force (replacing the Volunteers) and the introduction of Special and Extra Reserve Battalions (in place of the old Militia battalions), completely re-wrote the County Regiment numbering series.

I've recently joined the Border Regiment Forum and I was looking at army service number series in use by the regiment before the 1908 changes and afterwards. The regiment is as good as any to use as a case study.

The image at the top of this page shows attestation form E.502. The letter B, handwritten on the top right hand corner, indicates the man's company. He was living at Carlisle, attested at Carlisle and Companies A and B of the 4th Border Regiment, as well as the battalion HQ, were situated in Carlisle. Below is an example of attestation form E.501, this one completed by William Head who was joining the 5th Border Regiment. The letter E on his form indicates E Company which recruited from the Egremont area of Cumberland. Both images are Crown Copyright. Click on them both for readable versions. Complete service records for both these men exist in the WO 364 Pension Series at the National Archives, and now on-line via the Ancestry website. 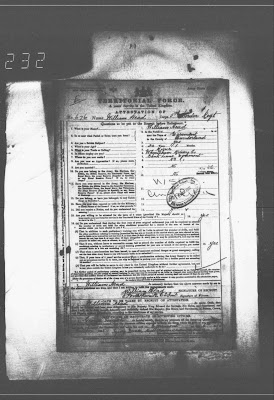 Not all newly created TF infantry battalions started numbering from 1 in April 1908 and there are plenty of examples of battalions which continued with the same series of numbers which had been in use by the Volunteers. Other battalions, which now found themselves being administered by more than one County Territorial Force Association, found themselves encumbered with more than one number series. This is particularly evident in some Scottish Regiments (although not, apparently, the Border Regiment).

The 4th Militia Battalion of the Border Regiment was one of 23 militia battalions ordered to be disbanded. Serving 4th Battalion militiamen were encouraged to join the newly created 3rd (Special Reserve) Battalion, and many did so. 2157 Private Henry Baylis and 2161 Private Henry Clark had originally joined the 4th Battalion in 1904, Baylis in September and Clark in December. That their numbers (which were issued sequentially) were only a few digits apart and yet their dates of joining nearly three months distant, helps to explain why the authorities considered the 4th Militia Battalion to be surplus to requirements. Both Baylis and Clark re-joined the 3rd (Special Reserve) Battalion in January and February 1908 respectively and were given new numbers. Both men's records (militia and Special Reserve) can be viewed on-line via the Ancestry website.

Serving members of the 3rd Militia Battalion were also encouraged to join the newly created Special Reserve Battalion which continued with the same series of numbering that had been in use by its Militia predecessor.

The only battalions unaffected by the changes introduced in 1908 were the two regular battalions, the 1st and 2nd, which continued their steady plod. By the end of April 1908 the two battalions could claim to have recruited just nine and a half thousand men over the previous 27 years.

I'll deal with Border regiment recruitment patterns in greater detail in future posts. This entry though serves to illustrate the changes in regimental numbering in Infantry of the Line regiments before and after 1908, and the Border Regiment example is typical.