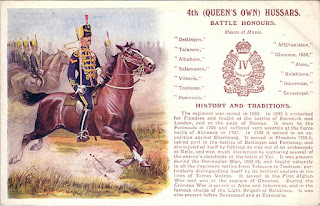 This post will look at numbering in the 4th (Queen's Own) Hussars between 1881 and 1906. The cavalry regiments were unaffected by Cardwell's reforms, the localisation of Infantry of the Line and the pairing of infantry regiments on territorial lines. However, in keeping with the self-imposed parameters of this blog, my starting point is 1881.

The database and information on this blog have been compiled as a result of studying service records in WO 97 (British Army pensions to 1913), WO 363 (WW1 service records) and WO 364 (WW1 pension records). All of these series are now online.

What this meant for the 4th Hussars was that from late December 1906 they began a new number sequence which they shared with the all of the Hussars regiments:

See my post on numbering in the Corps of Hussars 1907-1914. For further background, also see: