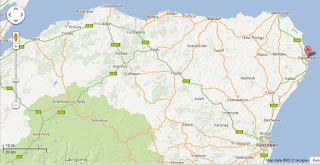 A 3/5th Battalion was formed at the beginning of May 1915 and it too used the same number sequence as that being used by the 1/5th and 2/5th Battalions.

When the Territorial Force was re-numbered in 1917, men from the 5th Gordons were issued numbers in the range 240001 to 265000, the lowest number being issued to the man with the lowest number from the first series. For instance, 240139 was issued to George Bruce who had originally joined the battalion on the 21st March 1912 and whose original number, according to his surviving service record in WO 364 was 1466.

Carolyn Morrisey's excellent website devoted to the 5th Gordon Highlanders is well worth a visit and also includes useful information on the numbering in this battalion: The 5th Battalion, The Gordon Highlanders. Map of Aberdeenshire (2012) courtesy Google.