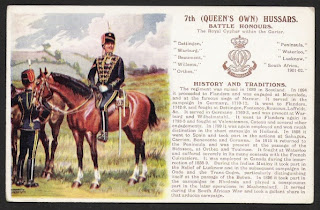 This post will look at numbering in the 7th (Queen's Own) Hussars between 1881 and 1906. The cavalry regiments were unaffected by Cardwell's Army reforms; however, in keeping with the parameters of this blog, my starting point is 1881.

What this meant for the 7th Hussars was that from late December 1906 they began a new number sequence which they shared with the all of the Hussars regiments:

See my post on numbering in the Corps of Hussars 1907-1914. For further background, also see my posts on Queen's & King's Regulations: regimental numbering and  cavalry numbering in 1906.