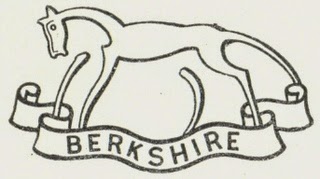 This post will look at numbering in the Berkshire Yeomanry between 1908 and 1914.

By 1914 the regiment's disposition was as follows:

The regiment formed part of the 2nd South Midland Brigade.

A 2/1st regiment was formed in September 1914 as a second-line formation to train and supply men to the 1/1st regiment and later, in 1915, a 3/1st unit was also formed. All three units shared the same number sequence.

Image courtesy of the Flags Forum.

The 3/1st being part of the new
6th RCR and were blest with their numbering system - some five figure some six-figure, some with GS or D prefixes others with none at all. I've yet to puzzle it out.

Finally where did you get the prewar ORBAT ? I have not seen the Wallingford drill station mentioned as being under B Sqdn (which it was)

Thank you for your comment (and I have amended Wallingham - silly typo - to Wallingford). That information comes from the annual army returns for the TF which Ray Westlake re-published in his very useful little book, "The Territorial Force 1914" which was published in 1988.

I've not made a study of the five digit numbers and so you information is helpful. The Berkshire Yeomanry was later affiliated to the Corps of Dragoons and so I suspect the D/ represents "Dragoons" whilst the GS/ is "General Service".