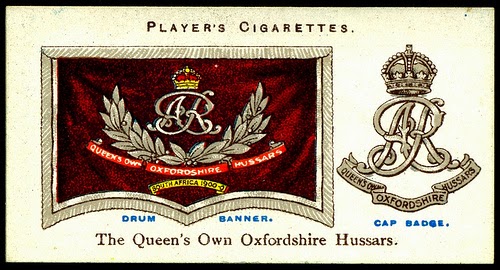 The Queen's Own Oxfordshire Hussars continued with its existing numbering sequence when it was formed in April 1908, most of the men joining that year being former Imperial Yeoman.

By August 1914 the regiment formed part of the 2nd South Midland Brigade which was administered from Oxford. Its own headquarters was also at Oxford with its four squadrons disposed as follows:

The Oxfordshire Hussars in the Great War

This from the Naval & Military Press:

"The Oxford Hussars originated as the Oxfordshire Yeomanry, a unit raised in the Napoleonic Wars. By 1914, the unit formed part of the territorial army and were immediately mobilized on the outbreak of the Great War. The regiment saw early service in the autumn of 1914 in the doomed attempts to save Dunkirk and Antwerp from the German advance, and then fell into the routing of trench warfare, holding the line at Messines, just south of the Ypres salient. After experiencing a German gas attack in the second battle of Ypres in April 1915, which they warded off with primitive respirators, the unit continued to serve in the salient, seeing action at St Julien and Bellewaarde Wood, and later at Vermelles. Aftyer years of frustration caused by the paralysis of trench warfare the Hussars came into their own again with the resumption of the war of movement at the end of the war in 1918. This is an exceptionally lively history, full of character sketches of notable members of the regiment and gives a clear picture of the role of a British cavalry unit in and out of the trenches. Illustrated with 27 photographs and 13 maps."

Note that Appendix A of this regimental history provides useful information on the regiment's fatalities, often giving location of death not recorded elsewhere: 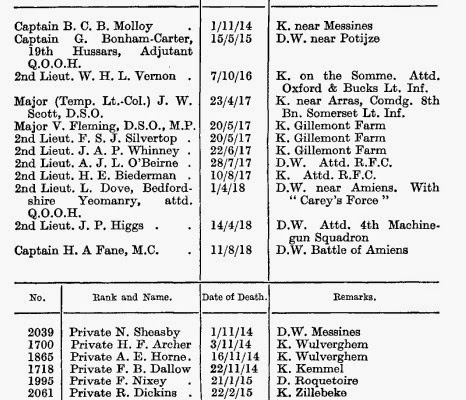