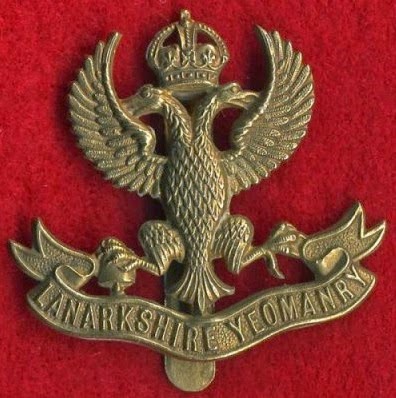 The Lanarkshire Yeomanry was another one of those Territorial Force formations administered by more than one County Association and as such it operated two distinct number series.

The Lanark Association was responsible for the administration of the Lanarkshire Yeomanry Headquarters (situated at Lanark) and three squadrons: A Squadron (Douglas), B Squadron (Lanark) and C Squadron (Coatbridge). Its numbers began at 1 in 1908; samples as follows:

The Dumfries Association administered D Squadron (Dumfries) and its numbering started from 2000 in 1908:

Both number series appear to have been continued up until 1917 when, with the re-numbering of the Territorial Force as a whole, men serving in the Lanarkshire Yeomanry were issued with new numbers within the range 35001-40000.

Two reserve units, the 2/1st and 3/1st, were formed during the First World War and these drew their numbers from the same series above.

Lanarkshire Yeomanry cap badge borrowed from the Scottish Regimental Badges website, with thanks.