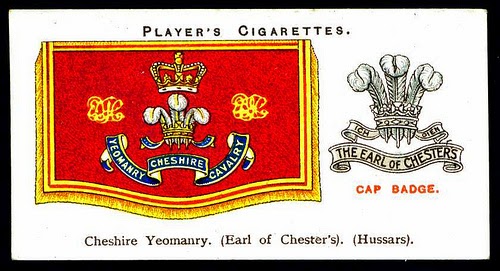 This post will look at numbering in the Cheshire Yeomanry (Earl of Chester's) between 1908 and 1914.  The regiment can trace its history back to 1797 although our story begins in April 1908 when the newly named regiment started numbering from 1.

By August 1914 its disposition was as follows:

A 2/1st regiment was formed in September 1914 as a second-line unit to train and supply men to the 1/1st Battalion, and a  3/1st unit would be formed in 1915. The three formations all shared the same number sequence.

Paul - I note these Yeomanry regiments use the 2/1st, 3/1st battalion designations. Battalion is a term I associate with infantry and according to the Long, Long Trail I see that the 1/1st of the Cheshire Yeomanry didn't become dismounted until 1915, after the 2/1st came into existence.

Do you know if the term "battalion" was used immediately the 2nd line units were created or is it just a term that's crept back in time from a later use for dismounted Yeomanry??

It's a good point, Adrian, and one that I don't know the answer to. I see I have freely used the term but I should check to see what the contemporary references were. There are many post-war references to battalions and also to "unit" and "regiment" (the latter of which is probably more correct as of course the term "battalion" is one that is more closely associated, as you note, with infantry.

Thanks for raising this.

Sorry if this is wrong approach, but your number block finished at 989,
My wife's g father served in the Cheshire yeomanry and had the service number 1332, could he have enlisted later than the date you quote I.e. Was there a later block of numbers for the 1/1 Cheshire (Earl of Chester's)

So if you can help with his actual time of enlistment it will complete that part of my research, as I have just received and started reading the very comprehensive book The Cheshire (Earl of Chester's)Yeomanry 1898-1967 -The last regiment to fight on horses by Lt-Col Sir Richard Verdin, OBE, TD

Good morning, not sure about making contact this way,
I see from your post that the Cheshire yeomanry were given service numbers in blocks which in turn showed enlistment date.
My wife's g father Thomas Clare was number 1332... Would this be part of the last block or was there another block of numbers for later enlistment?
We know he was on the muster roll March 1916 prior to going to Egypt as part of HQ attached to B squadron no2 troop Any help will fill in a gap in our research

Thanks for posting. I have only published partial information for all regiments and the number 1332 does indicate a later enlistment. There was only ever one block of numbers shared by the 1/1st, 2/1st and 3/1st.

Mr Thomas F de Lucey was my grandad who came back from the first world zWar to Poynton, Cheshire. Born in manchester, my mother never knew about his work as in those days it was never spoken about. I hope you have maybe a suggestion for me to research the medals he left to my older brother.

Use the number on the edge of the British War and Victory medals to find his medal index card, then look for the entry in the medal rolls and in WO 363 and WO 364 (also available on line with Ancestry and Findmypast). Failing this, engage a researcher.